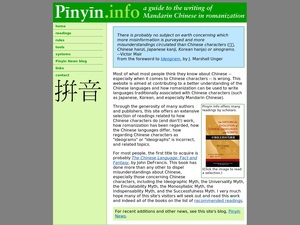 This website contains a wealth of information about characters and romanisation. It's maintained by Mark Swofford. There are many articles about Pinyin as well as a number of useful tools, which I might post individually in some cases later. There is also a collection of interesting articles on Chinese languages in general.

Most of what most people think they know about Chinese -- especially when it comes to Chinese characters -- is wrong. This website is aimed at contributing to a better understanding of the Chinese languages and how romanization can be used to write languages traditionally associated with Chinese characters (such as Japanese, Korean, and especially Mandarin Chinese).