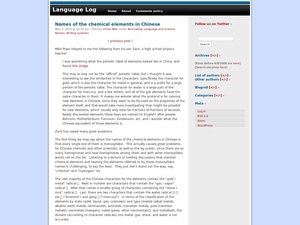 This blog post contains both a list of most of the elements in the periodic table in both Chinese and English, but more importantly, it contains a discussion about the characters used to represent the elements. The characters have a semblance of being very logically chosen, which gives a very neat impression (all metals have the metal radical, gases share the same radical and so on). However,t his categorisation isn't wholly accurate. Furthermore, the fact that the elements are monosyllabic in Chinese increases the risk of misunderstandings due to the large number of homophones (or near-homophones).