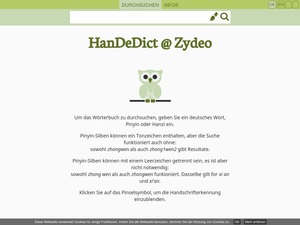 HanDeDict is an open-source, collaboratively edited Chinese-German dictionary, licensed under Create Commons (CC BY-SA 2.0 DE). It started out as a translation of the CEDICT Chinese-English dictionary, and was actively maintained with the support of the Chinesisch-Deutsche Gesellschaft e.V. Hamburg between 2006 and 2011. In August 2015, the website of HanDeDict went offline; the last snapshot on the Internet Archive’s Wayback Machine is from August 1, 2015. The text file that contains the entire dictionary in its most recent form can be downloaded from Github. The website you are viewing now is based on this file.