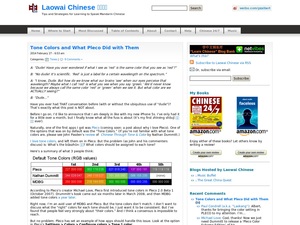 Laowai Chinese doesn't update often, but when it does, it's usually worth reading. The blog is about anything related to Chinese and China, but I find posts about vocabulary, grammar and culture the most interesting ones.

I started learning Chinese on my own (well, I had friends and dictionaries) my first year in China while teaching at a college in Nanchang, Jiangxi Province. My second year was spent as the only English literature teacher at Yunnan Agricultural University in Kunming, Yunnan Province. Since then, I’ve been working at Peizheng College in Guangzhou, Guangdong Province where I teach English and also Beginning Chinese to the other foreign teachers.

During my years in China, I’ve served as a translator in many capacities, hosted a televised English speech contest, appeared on a Chinese-language radio talk show, and gigged with a local rock band for the opening of a new supermarket. I’ve also written a few Chinese pop songs (available here) and I currently serve as the director of Peizheng College’s drumline. I’ve still never taken a formal class on Chinese.